Where do I even begin…The game is pretty decent but I can’t let the hype rule this mini review. I just can’t lol. So here we go. First thing I noticed when actually starting it all up was that the game is so well put together you have a hard time believing that this is an ALPHA test. Little randomness of knowledge from what I know. Alpha is usually the first phase of testing and it goes into either closed or open beta testing which is almost complete but just got a few kinks. Alpha testing usually is pretty buggy and messy. Playing Destiny was just amazing for an Alpha test that I don’t kno how they can really improve but I am pretty sure they have a few areas to get going… 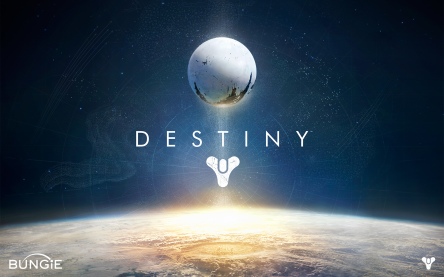 I want to start off with the fact that the character creation was pretty interesting even though i feel they need some more hairstyles but that’s just me. Creating the character went smoothly you were given 3 races Human, Awoken and Exo. After that you get into a break down for Male and Female for each race and off to face styles and hairstyles and even markings on the faces with makeup or scars. After that you finish up with the creation of the character and they drop you into a planet and you are off on your first and I think only mission in the alpha test. Later on in explore mode you will be able to find random mini missions or side quest or what have you. 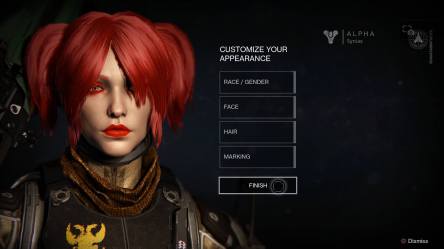 Red heads =O We shall call her Pixximus

When you arrive, you are outfitted with auto rifle, scout rifle and a shotgun. Also you start off at level 3 and some basic gear ( Head piece, gloves, chest piece, boots ) Also a class armor, in  the case of the photo you have the Hunters Makeshift scarf Hunter Cloak.

Reminds me of the speeders….of SWTOR

So now bare in mind that at this point any one on your friends list can join you and your game if you already have it open and here and there my friends joined my game and i’ve joined theirs while playing the game in the last couple of days and its pretty interesting. We actually had a moment where my friend and I decided to start exploring certain parts of the map when you go into a map mode called explore mode. You can go to it through the launch section of the game when your on your ship and looking for a destination. We ran into a dark basement like area that nearly lead to our death because we ran into enemies with ?? as levels. If you know what ?? means for a level… You should know to stay away from situations like that… Sadly my friend died…brutally… This game will be interesting to those friends of mine that aren’t knowledgeable in the area of RPGS.

Needless to say, I died trying to get this photo…enjoy

In conclusion to this randomness of an article. This game is pretty well set up. It has alot to look forward to. Also it feels like Halo and COD had a baby… and called her Destiny. With the ambiance of Halo with aliens and the terrain. When it comes down to the shooting mechanics it feels like COD… play a hunter and use your melee… You will understand what I am talking about. So if you got an invite give the game a shot. You will not be losing out. This game has alot of potential and I really hope this one doesn’t flop like Defiance…. lol