So far the game has been great but I had a few issues nothing game changing or dramatic. Just a pet peeve or two that wouldn’t make sense. The roll out of the game was a bit bumpy with it taking people some time to access the files and beta codes due to traffic. Opening was at 1 pm estI was able to start downloading at 1:20 pm est. By 4 pm I was able to play and enjoy the randomness.

Things got a lot better once my friends signed in and ready to go! I was already level 5 and they started new so I tagged along anyways. Tons of fun to be had when playing with others compared to playing on your own. Was wondering if people we would run into had mics on because we would only hear each other. Would be nice to have a random encounter and conversation with a fellow player. 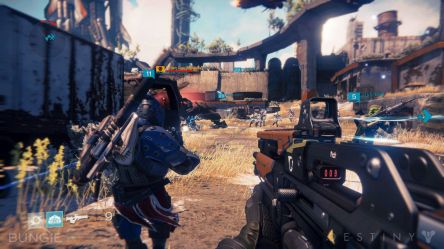 I was disappointed when we took on the last mission and it cut me off at lvl 8 again like the alpha. For some reason many of us were lead to believe that we would be able to reach lvl 20 and go about more contenr this time around. We got the more content part of things but level remains the same and kinda killed it a bit for me. I give them props on the fact that random events happen from time to time while playing through the beta. I can honestly say overall this is a great game and your not in the right state of mind if you do not want to try this game out… from traits of call of duty and halo both games that has great reputations… and not even considering Destiny… you will be missing out.