Hey everyone! Syniax here with my thoughts on a game we pretty much put some time in. We’ve seen a lot of games coming out with the whole survival theme being tossed out. From titles ranging to The Forest, Rust, H1z1 and even Ark which will be on PS4 later this year. So we did a vote and selected The Forest to be one of the ones we should try out to see if the game has potential to ride it out with the rest.

In the beginning of the game you basically start off as a guy who survives some plane crash. When you awake your son is taken away from you by these cannibals which inhabit the island you are stranded on. The goal obviously is to survive…

So my friends (Templar and 13 aka Delirium) and I go all out on this new adventure right after a horrific plane crash. So when we started this game out we were all pretty much confused on how and what we need to do. We started with jumping into the water to clean ourselves up (preventing risk of infection) and eventually figured out the whole building mechanic and started to build a mini cabin. At some point Delirium dropped a tree onto the cabin and destroyed it …also killing Templar our first death.

So we decided to rebuild after Templar was revived somehow. I chose a bigger cabin which took a bit longer but we managed after meeting some random surprises. 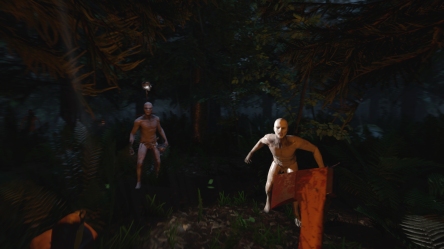 Remember those Cannibals who took your kid? Well they are back and they want to eat you alive…or well cooked who knows. The basic ones are pretty easy to hack away at with your trusty ax. Eventually female ones come around which seem a bit faster and boobs hanging out purely for distraction. Also at times one of them will be armed with a club which you can take for yourself. We managed to finish up the building of the log cabin and building bone fires and other little pieces of fun like a log holder and fire pit to cook our food.

At one point we manage to find a hole in the ground and decided to take the rope down eventually leading us to the very bottom of this cave. A huge fat mutated human blob tackled me down and tore me into two… Templar and Delirium took him out and continued to explore. After that we started to figure out how to make weapons. One of us made armor. Another made a bow. 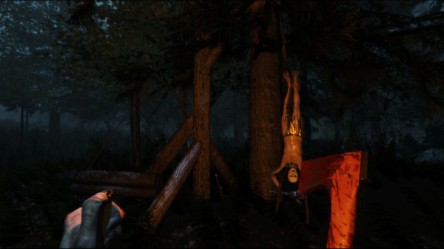 For the most part this game is fun. For me what does it the most is the fact that you have to have people with you playing this game. I don’t think I would have had as much fun playing alone vs playing with friends. I do however have a hunger to explore in my own game to see what I can create and what I can do in the game to further my experience. I don’t like the fact that once the host leaves out all that progress goes with him/her. At some point if this game goes big I am pretty sure they will set up dedicated servers to play on making the experience a bit more consistent. We will be doing a podcast covering this game and other survival horror games over time. This was in a way inspired by the new Resident Evil game that recently dropped the demo. I guess you can say we are searching for a good scare in gaming. Not many games can actually put a scare on people. Resident Evil’s new title pretty much did some  damage in that area along with having a community uproar on trying to figure all the crazy things out…such as that dummy finger. Anyways more to come and always remain epic!